So, remember that Chocolate Bundt Cake I posted about the other day? Well, it’s damn good, but the homemade whipped cream that goes along with it takes it over the top.

I was originally going to post the recipe for this whipped cream  in my own words (you know, as usual), so I emailed my mom and asked her to send me the recipe (since she’s the one who made it and this recipe is her’s).

Then, I read her email and I realized how funny it was and also that you’ll be able to see that I get both my writing style and my sense of humor from her, so I thought I’d just share it exactly as she wrote it. Enjoy.

From my mother’s lips (well, fingers, I suppose):

“Oh boy, this is a tough one. Kidding.

Use cold whipping or heavy cream – usually one pint is plenty.
I also use a cold bowl and cold beaters. It helps beat the cream. Put them in the fridge for 15 minutes. Be sure to have the beater UNPLUGGED when you attach the cold beaters.
Beat the cream on high until stiff peaks form. Once stiff (yeah, I know), add powdered (confectioner’s) sugar to taste. Try a little at first – maybe an 1/8 of a cup, and add more as desired. Depending on what you’re serving it with, you may want it sweet or not so sweet.
I simply shaved dark chocolate on top. I had Ghiradelli dark chocolate squares but use what you have – although, it does have to be a firm/hard (yeah, I know) chocolate to be able to shave it.
That’s it. It’s simple. If for some reason you have to make it far in advance (not recommended though), a chef I saw said to melt one marshmallow for each cup of cream used  to keep it stiff (yeah, I know). Add it at the end, but keep in mind that it’s sweet, so you may need to cut your sugar down. I would put them in first, and then add the sugar.
Don’t over beat, but I like it very stiff (yeah, I know).
Love you

Mummy”
So… now you see where I get it.
Anyway, this cake with this whipped cream? Divine.

Make both. Together. You’ll thank me (and my mom).

So, yesterday, I made — no joke — SEVEN BATCHES OF COOKIES.

It was a long day, but it was worth it. I was experimenting, essentially to teach myself more about the chemistry of baking (also, this was for a job and I was being paid for it and the ingredients were paid for, too). I’m sure my friends and co-workers will be grateful for this experiment. 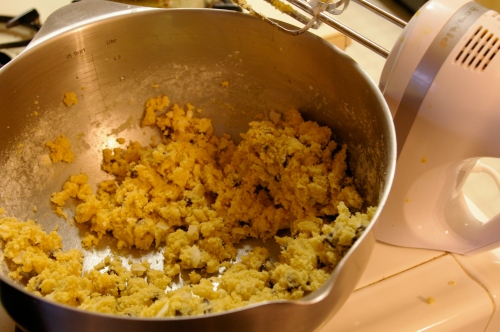 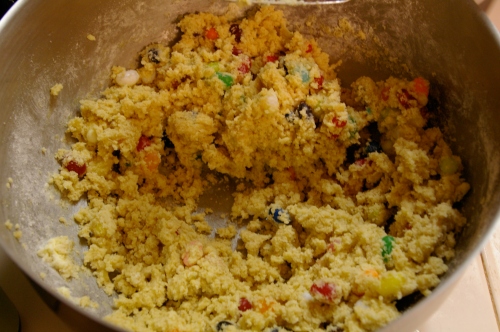 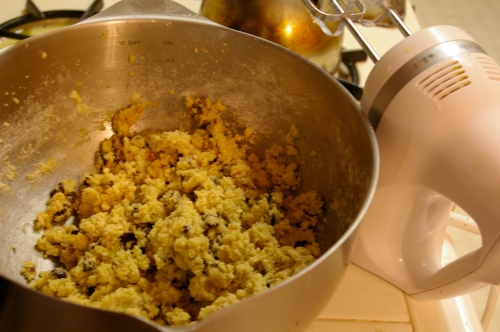 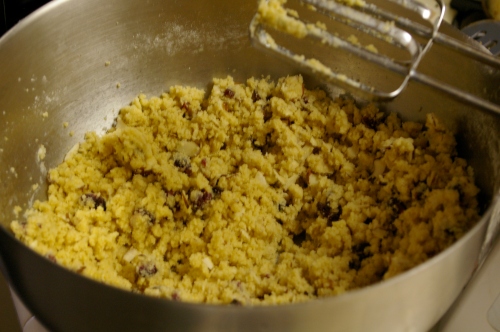 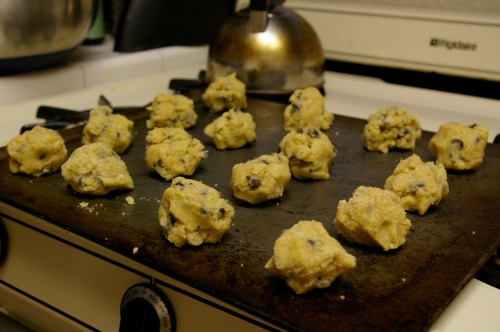 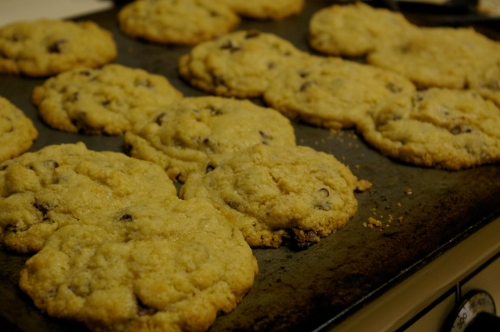 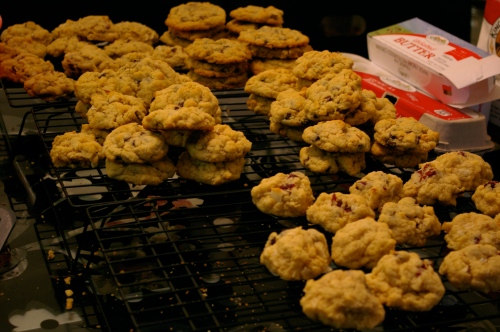 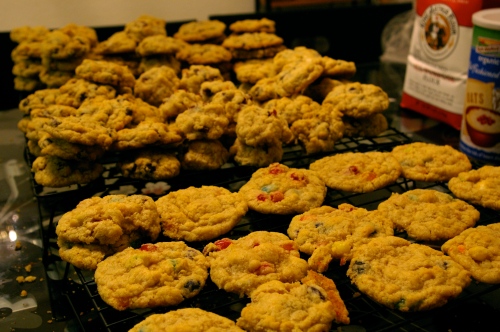 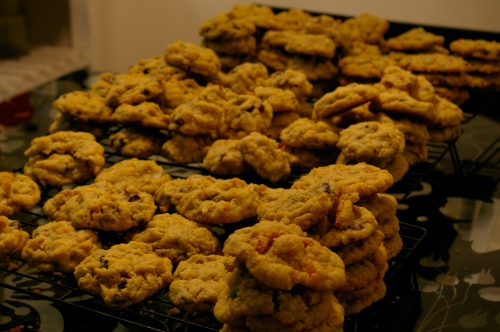 It’s almost comical to watch them pile up, isn’t it?

Thankfully, because I just kept making batch after batch, the dishes weren’t ridiculous. I just rinsed them between batches as I went along. This (plus the one cookie sheet) is all I had to wash at the end:

That’s not so bad, right?

I, however, was a little worse for the wear. 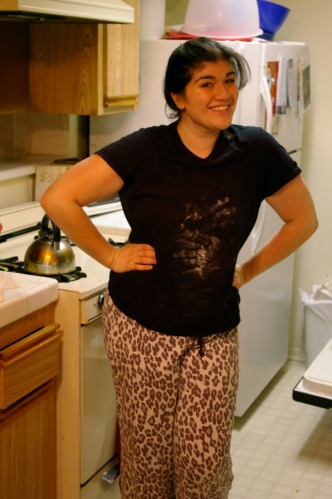 I’m not the neatest of bakers.

Also, please ignore that I hadn’t showered or changed out of my pajamas and that this picture was taken around 7pm. That’s cute, right?

Remember how I said the other day, when I posted those Banana Walnut Muffins, how I made two different kinds of muffins?

Well, I wasn’t kidding! I did! And actually, I liked these a lot better (though I will say that banana walnut just isn’t my favorite flavor). And thankfully, because they came from the same base as the Banana Walnut Muffins, they are similarly low in fat and fluffy and light. 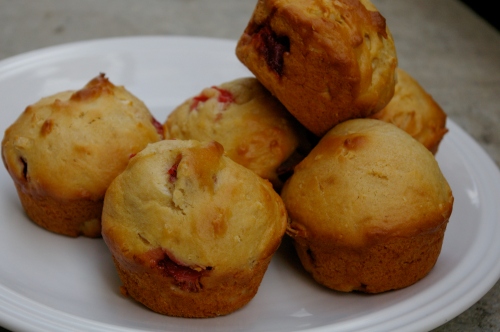 These were Strawberry Coconut Muffins and I thought they were just lovely. This is a recipe I never would have come up with on my own.  I came up with it because I was baking for a friend of mine and, while she doesn’t love sweet foods, she does love both strawberries and coconut.

(Look at all those strawberries! Yum.)

And thus, these muffins were born.

Use a spoon to mix in strawberries and coconut

Fill cups in muffin tin about 3/4 full with batter.

And, as with the other muffins, these are best served cut in half, toasted, and slathered with a little Earth Balance or butter.

I made two different kinds of muffins this weekend.

I actually made them at the same time. I used the same base, doubled it, and then I split it in half so I could add the other additions. 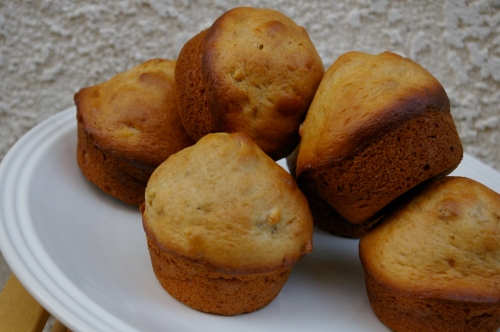 I’m pretty proud of these banana walnut muffins. They have fruit, nuts and yogurt in them — all things I like! Plus, they’re fluffy and light and you feel really clean after eating them. 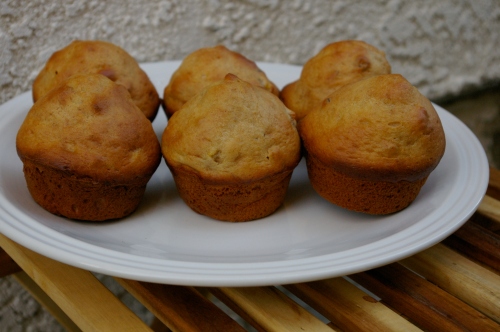 In a separate bowl, blend sugar, oil, eggs, vanilla yogurt, almond milk and vanilla extract. Combine with dry mix.  Mash banana with a fork, add to batter, and blend the banana in until just combined.

Use a spoon to mix in nuts.

Fill cups in muffin tin about 3/4 full with batter. 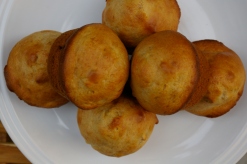 I think they’re best served warm, with a little Earth Balance or butter on top. 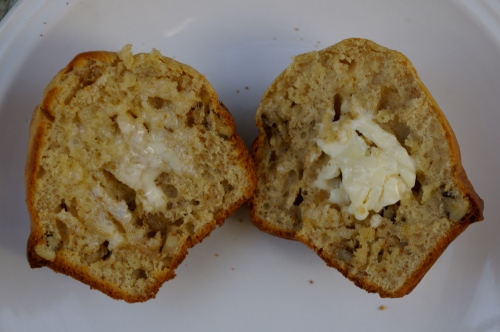 So, I was completely trying to make something else when I made these. I had this idea that they were going to be shortbread bars.

But then, as I was creating the recipe, I cut down on both the butter and the sugar.

In case you didn’t know, that’s kind of what makes shortbread… shortbread.

The good news is that these bars are kind of like little pie bars. They taste like pie. And they’re healthier. Slightly less healthy when you top them with ice cream, but that definitely is how I suggest you eat them.

*Note: If you don’t have access to a Trader Joes, which is where I found cranberry apple butter, I think any old apple butter would do just fine.

Using an electric mixer, blend the butter, sugar and maple syrup. Add the eggs and pumpkin puree and blend until evenly mixed.

Spread half of the dough on the bottom of the pan. Spread the cranberry apple butter evenly across the dough. Press pieces of the rest of the dough across the top of the dish. You won’t evenly cover it, but you will come close. See below. 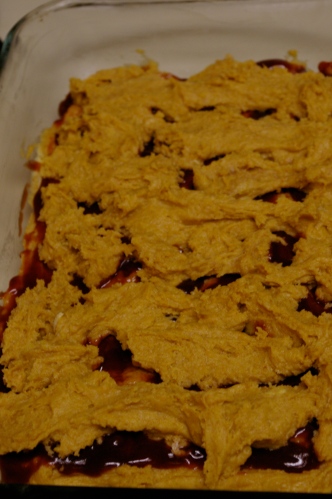 Press walnut pieces into the top of the dish. This will spread the dough on top slightly. Again, see below.

(In case you can’t tell, that’s after it’s baked.) 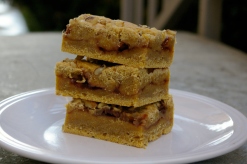 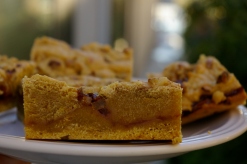 I really liked these. I didn’t think I would at first, when they didn’t turn out as planned, but they really grew on me when I realized they were just something different than I’d thought they were. Served warm and topped with vanilla ice cream, these are to die for! 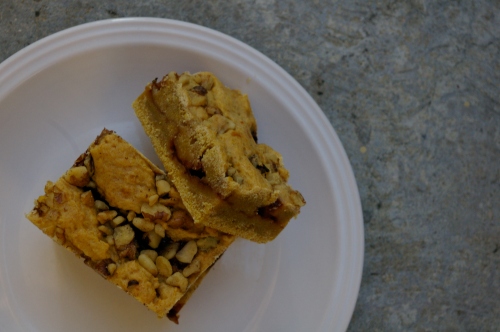 Sometimes, you’ve just got to be a little flexible. 🙂