I’m kind of excited to share this recipe with you because it says “home” to me. This meal is definitely a family staple, created and perfected over time by my mom and served on summer Sunday nights after our Saturday reapings at the Farmer’s Market.

In fact, smelling this cook made me a little homesick!

It pairs yummy indulgence with fresh, whole ingredients, which is pretty awesome. It’s also really simple but full of flavor, so… that’s good.

You can change up the vegetables based on what you find at the Farmer’s Market (or the supermarket, if you must), but I feel I must insist that you keep the carrots, sweet onion, and corn. They add a really hearty, flavorful aspect to the dish that makes it what it is.

This is everything you need to make this dish, as I made it (in multiple quantities — remember, I was making this for a party): 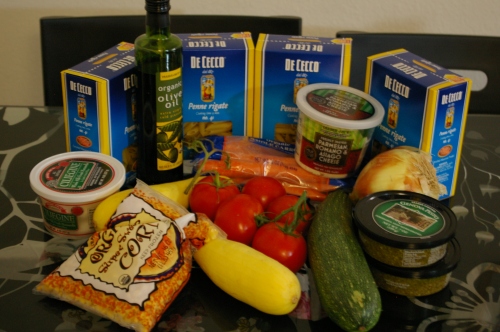 It’s the kind of recipe that makes pasta “worth it” to me, which is something I don’t often feel. Pasta always seems like too many calories for not enough nutritional value to me. This recipe, however, makes me change my tune. The fact that it’s chock full of vegetables certainly doesn’t hurt matters.

In case you didn’t notice from the ingredients picture above, when I made this the other day, I made four pounds of pasta. It was a lot. Turns out, the party consumed less than two pounds.

In other words, Mark and I have been eating a lot of pasta lately. And I may have brought some to work to make my friend Chris eat for lunch. I’m hoping he’s not complaining.

Below, I’ll write the recipe for a four-ish serving amount. So… you don’t need as much as I have in that photo of ingredients above.

Bring 6 cups of water (salted, if you prefer — I do) to a boil. Add pasta and cook per directions (mine was 13 minutes), adding a drizzle of EVOO to the water.

Chop tomatoes into chunks, salt lightly, and drain on a paper towel.

While the water is boiling and the pasta is cooking, chop the onions, carrots, zucchini and yellow squash.

Saute them all in a little EVOO (enough to coat the pan) over medium-high heat. Start with the onions, then add the carrots, then add the zucchini and yellow squash.

Stir the frozen corn into the cooking pasta for the last three (ish) minutes of the pasta’s cooking time.

Drain the pasta and put back into the pot. Stir in the sauteed veggies, pesto, and romano/ parmesan/ whatever other cheese. Right before serving, stir in the tomatoes and fresh mozzarella. 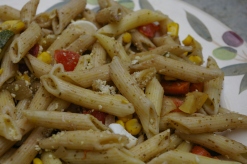 By the way, this dish is great both hot and cold. Awesome, right? 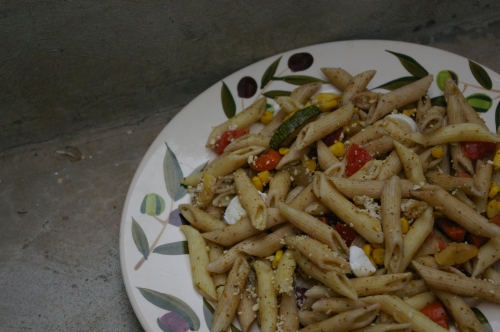 Once I started being on a carb overload, I started serving it over spinach and made it more of a salad. The pesto offers enough flavor to act as a salad dressing, so it works perfectly.

And, obviously, it worked beautifully as a dinner party dish.

This weekend was packed full of events, many of which had to do with Independence Day. Before I get to a post entirely about the fourth, though, I’m going to share a little bit about my lovely long summer weekend.

On Saturday night, a group of us went to see Mark perform in King Lear, which was a production in the Shakespeare by the Sea program.

It truly was right by the sea, which was beautiful.

View of the stage from the same location:

The event itself was fun even before the show began, as it was another picnicking affair. People filed in throughout the hours before the show, while the actors were still rehearsing, to sit with friends and family and enjoy meals in the cool sea breeze. 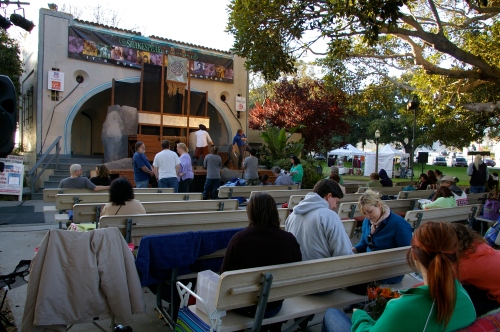 We had originally planned on sitting on blankets, but we couldn’t help but to take advantage of the benches.

From our seats, we could see Mark “backstage!” Can you spot him?

Anyway, Mark was phenomenal in the show and it was so fun to watch him perform.

Actually, a lot of the actors were really incredible. The show is full of a lot of talent. I’m  not a huge Shakespeare fan (I know, I know) and I thought I wouldn’t really enjoy the actual show, but I found that the actors were dynamic enough to make it fun even for a non-Shakespeare loving audience member like myself.

Back in college, when Mark and I met (actually, this is how we met), he was in four things that I directed during my senior year — three plays and one sitcom pilot. Kind of cool, right?

Hopefully this will be just the first of many things we get to see him in now that he’s professionally acting in Los Angeles!

I surprised/ embarrassed Mark with flowers after the show.

I’m telling myself he liked it.

Anyway, bright and early the next morning, Mark and I went to the Studio City Farmer’s Market for the first time.

It was such a great Farmer’s Market, and so big, too! There was lots of entertainment, which gave it a community event feel. 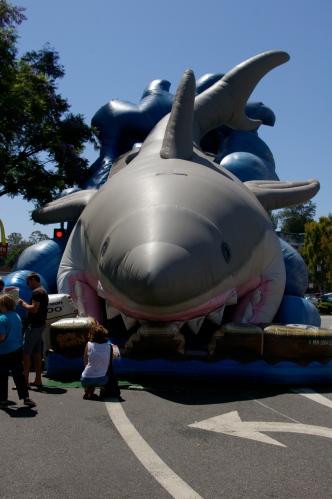 Oh, and we saw Jason Bateman, so… that was awesome.

The best part of the Farmer’s Market though, for me, was the FRUIT! I ended up finishing phase one of the SBD a day early because I needed to pick fruit out for the sangria I was making for the fourth and didn’t want to pick blindly.

I was like a kid in a candy store. At least it was nature’s candy, right?

The blood oranges and country sweet yellow peaches were my favorite. A-mazing. Seriously. I’m drooling just thinking about them.

Lots of walking (around the FM, around town, etc.)

Anybody else go to any farmer’s markets this weekend? Was the fruit just as amazing everywhere? I swear, the fruit I tasted on Sunday was pure perfection.

Oh, and I really encourage any fellow Los Angelites to go see Mark in King Lear. They’re about to go on tour throughout LA County and I know Mark would love to meet any of you if you end up going to see the show!

Everybody else is celebrating Halloween tonight, right?

I sure am. Well, tonight and tomorrow. Can’t wait.

Today has been absolutely beautiful. Don’t believe me?

It’s one of those days that makes me excited to live in Southern California. 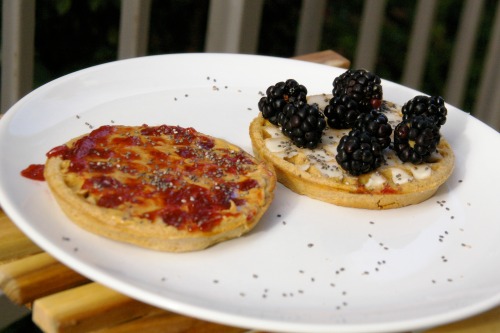 Toward the end, I started smooshing little pieces of them together.

Good start to the day, right?

I continued the good morning with a lovely trip to the Farmer’s Market. I don’t have a ton of time to write much more, but I’ll leave you with some pretty pictures. 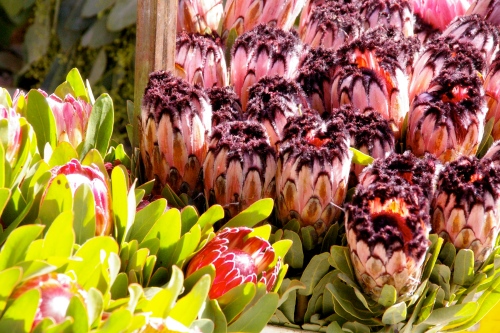 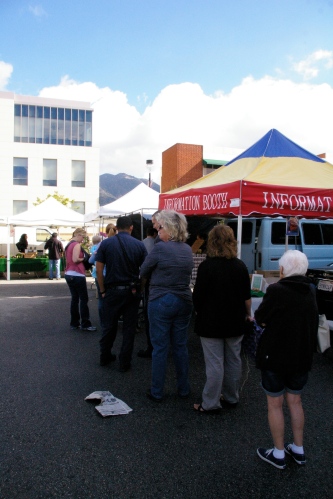 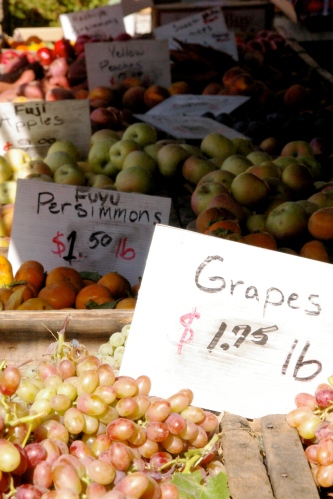 And… look what I found!

Oh, just let me have it. We don’t get many of those in these parts.

Alright…. time for me to…

Have wonderful nights, my friends! What are you doing to celebrate?

Such a busy weekend. I’ll have to bring it to you in installments.

Remember, a while back, how I said I had to say goodbye to someone near and dear to my heart?

That someone was my beautiful roommate, Mamito.

My new roommate has arrived! 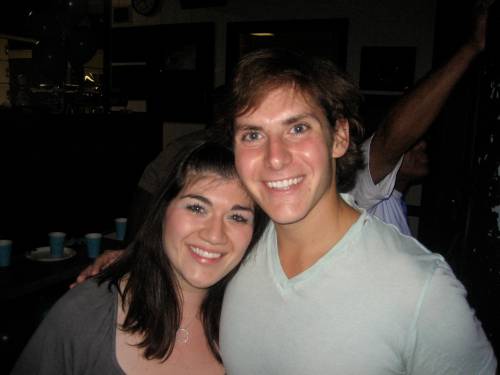 Back when we were young and innocent (well, you know), he was one of my best friends in college.

We were kind of silly back then.

We were trying to recreate our beauty from the glory days.

You’ll probably see him pop up on KWH every so often!

Anyway, we first reunited this weekend when we went out for dinner with his dad on Friday night. I was treated to some yummy pasta with veggies and marinara and more than one glass of Sauvingon Blanc.

Unfortunately, I had the same allergic reaction to this wine that I had to something else (I suspected the dark chocolate-covered edamama, then) the night before my 10K last month. I couldn’t sleep for hours because my heart was pounding so hard.

Fortunately, rather than stressing out about what I had to do the next day, I was able to allow myself to embrace the situation. I watched a few episodes of some TV shows I’d saved on my DVR and waited for the feeling to subside, at least slightly. I was able to be flexible as I knew that I could either postpone or shorten (as it would get hot quickly and early the next day) the long run I had planned for the morning.

Happily, I didn’t wake up too late and I managed to squeeze in 3.38 miles before it got too hot to feel comfortable running anymore. I also paced pretty well, fitting it all into 38:11, giving me an 11:17 pace. 🙂

I followed the run with a delicious smoothie, of which I shared part with the new roomie, a loyal KWH reader who was curious as to the taste. 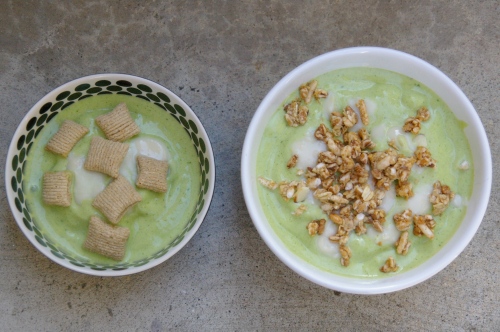 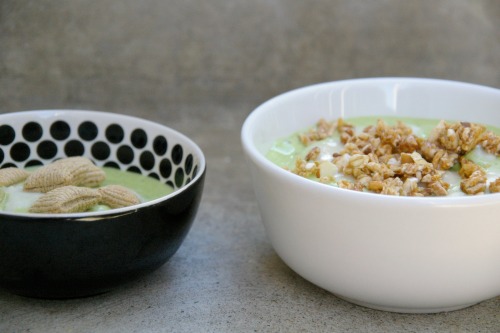 It was a tropical smoothie. Nothin’ you haven’t seen before! 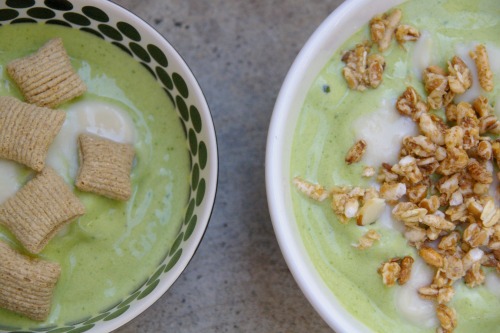 We followed the smoothies (and a serious shower, on my part) with a trip to the Farmer’s Market.

Signs of fall are getting more and more abundant. 🙂

That picture is like Christmas in a veggie pile!

See the sunshine splashed across the produce? It was such a beautiful day! I’ll even forgive it for being so darn hot.

My favorite part of the trip was a stop at the new honey stand (of course). 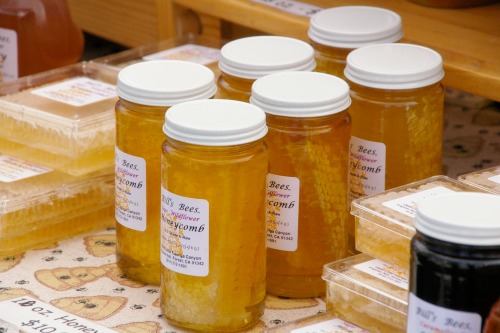 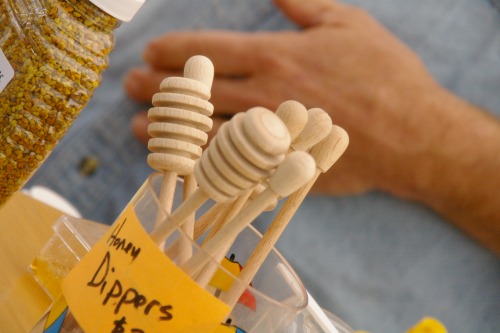 Is that a perfect Saturday morning, or what?

I really meant to bake something this weekend, but time just disappeared right before my eyes. Next weekend!… Hopefully. This week is going to be intensely busy and I’m just trying to keep up with it!

Most of the weekend’s eats went undocumented by camera again… but I can tell you that I didn’t really eat anything special, so it’s no big deal.

The good news is, I captured some of the good times!

I made a trip to the Farmer’s Market on Saturday morning, knowing I wasn’t really planning on getting anything (I hadn’t planned out my meals yet) but also knowing that a Saturday doesn’t really feel complete without perusing the market.

I particularly enjoyed the few but noticeable signs that it’s fall. 🙂 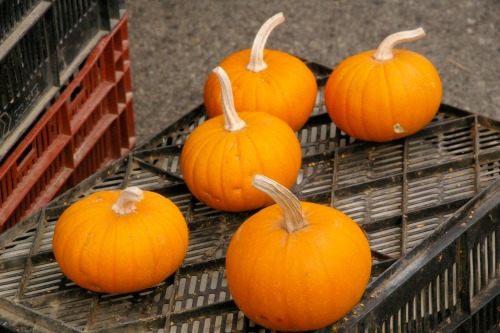 At some point that afternoon, I helped myself to an iced, soy, one-pump Pumpkin Spice Latte from Starbucks (aka heaven in my mouth) and a mini vanilla scone, just ’cause. 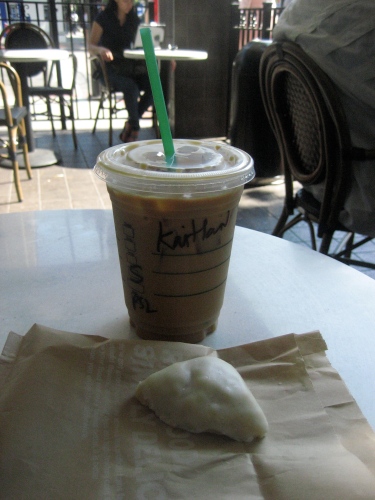 Close up on the name spelling (it really never gets old):

On Saturday night, I went out with a bunch of my friends to see The Social Network.

Seriously, guys, this movie was so good. I’m not a huge movie lover (I’m more of a TV girl, in case you hadn’t noticed), despite being a former a film student, and still, I was absolutely riveted throughout this film. The acting, the directing, the writing, the pacing… everything. It was great. See it. Especially if you’re of my generation (aka the kids who were in college when facebook emerged).

Afterward, those of us who had gone to see the film together went out for drinks at the nearby Gordon Biersch Brewing Company in Burbank.

Some of the girls (Hanna, Audrey and Elisa):

And me with all the boys (Nick, Ben, Andrew, Basel and Nate):

Am I a lucky girl, or what? Even though some of them are being silly…

I got the Hefeweizen, which was good but not my favorite hefe – not by a long shot! I’d get something else next time. I wasn’t a huge fan of the banana taste.

Sunday was an intense day of cleaning the apartment. I’m going to have people to impress in the apartment this week and I don’t think I’ll have much more time to clean!

Hope you all are having a happy Monday!