Weekend on the Couch

I was invited to a ton of fun events this weekend. Despite being sick, I told myself I’d be able to make it to every single one. I refused to admit that I wouldn’t be able to make it. I gave every person who invited me a “we’ll see, but probably!”

I could drag this out for a bit longer, but I’ll spoil the surprise: I didn’t make it to a single one.

Instead, I sat on my couch and ate a lot of soup, tried to consume a lot of immune system-boosting foods (read: garlic, cinnamon and blueberries), and drank a lot of tea, orange juice, and ginger ale. Oh, and I ate a lot of Saltines… but that’s different. Sort of.

Don’t believe me? Well, I definitely didn’t take a ton of pictures (pretty much the last thing I care about when I’m sick), but I did take a few just to prove my point.

Mark made the antioxidants part pretty easy. See, when I got home on Thursday, I found that Mark had made an entire batch of whole wheat, refined sugar-free blueberry muffins, simply because he wanted one muffin.

I’m a really good roommate because I’ve been all over eating the rest of them.

For the antioxidants, of course.

Alongside the muffins on Friday, I also had less than half a cup (all I had left) of nonfat greek yogurt with more blueberries and cinnamon.

Alongside every breakfast? Orange Juice. 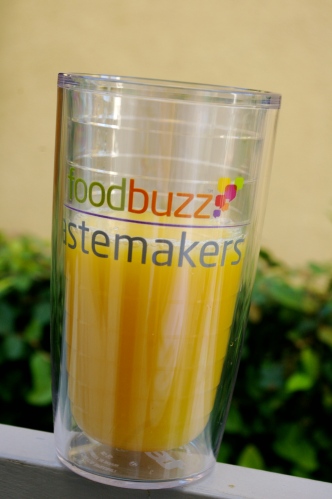 That cup you see holding the orange juice is a Tervis Tumbler, which was sent to me because I’m a part of the Foodbuzz Tastemakers program. Pretty sweet, right?

Foodbuzz tells us that these cups are “virtually indestructible” and that they keep hot drinks hot and cold drinks cold. So far, so good! No arguments from me. I’m happy to have it. It seems pretty kid-friendly, too! Of course, I don’t have any kids, but I do have Mark. 😉

Anyway, I didn’t just limit my  Tervis Tumbler to OJ — it was also used for ginger ale, which I’ve been drinking fairly heavily alongside Saltines because my meds make my tummy hurt.

And the cup has been enjoyed alongside many a bowl of soup, too.

This bowl was filled with Chicken Pot Pie soup. It was good! I started to get a little sick of Italian Wedding and Chicken Noodle, so I had to start branching out.

The rest of my weekend has been basically taken over by my television. I have now not only caught up on almost everything on my DVR, but I also managed to watch four different movies.

I watched True Grit on Sunday, which I definitely enjoyed (though I felt it was a little bit long).

I think Hailee Steinfeld is amazing. I actually worked with her once on a movie when I was in grad school!

But it’s Saturday’s collection of movies, actually, that I think was interesting. I didn’t mean to do it with movies #1 and #2, but I realized the theme before #3 and thus made my choice accordingly. 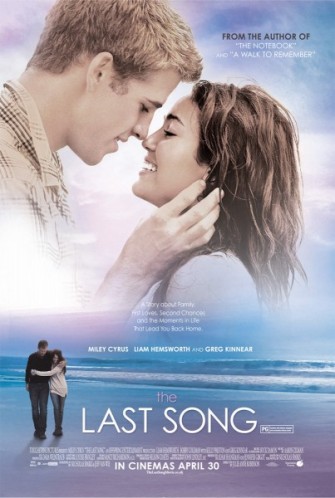 annnnd Movie #3: The Kids Are All Right 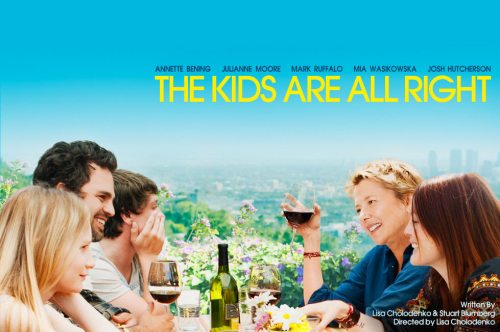 I know. Three Oscar contenders and The Last Song. The irony does not escape me.

Buuuut who can figure out the theme of the three Saturday movies?

Winter’s Bone starred Jennifer Lawrence, The Last Song starred Liam Hemsworth, and The Kids Are All Right starred Josh Hutcherson. That’s Katniss, Gale and Peeta, respectively. And honestly, after seeing these three movies, I am absolutely sold on each of these actors. I am so happy, especially with Katniss and Peeta (the last of whom really matters to me!).

I am so excited for these movies, it’s not even funny.

Who else is a Hunger Games fan? How do you feel about the casting choices?

Yesterday was not a happy day.

So, here’s the deal. I intended for this to be kind of a big reveal, mostly because I had a hard time believing it was actually going to happen, but my knee surgery is scheduled for next Wednesday, October 12th.

Turns out, though, that my superstition wasn’t that far off. Why, you ask?

Well, on Tuesday,  I officially went through with my Pre-Op and decided for sure that I was getting the surgery next week.

And then, yesterday morning, I woke up with a terrible sore throat.

There wasn’t really any time to deal with that, though, because I needed to go get my blood drawn for the surgery.

Which is where this happened:

Well, I won’t go too into detail, but let’s just say that two different technicians refused to listen to me about my tiny, hard-to-find veins and decided it would be a better idea to dig around my arms with needles. I wish I was exaggerating.

Sorry, I guess I did go into detail.

Anyway, by the time I got to work, I’d already given up pints and pints of my blood, hadn’t eaten, and was dealing with a burning and aching sore throat as well as quickly dwindling energy.

It was time to replenish said depleted energy, which brings me to the point of this post: sick food.

Here’s how I’m looking at the idea of sick food right now:

And I need your help.

This was my breakfast:

My lunch was just a frozen Amy’s Organics. 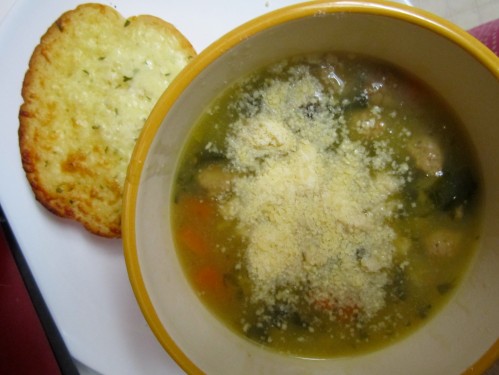 Italian Wedding soup with added garlic and parmesan and garlic bread. I hear garlic is good for the immune system and that sodium is good for the throat. This dinner was perfect, in following those guidelines.

What are your best “sick foods?” What did you grow up eating when you were sick? What tricks did your moms teach you?

I used my Crock Pot! Woohoo! Cross that one off the New Year’s Resolution list. Well, at least note that I started the process.

It was so easy. I need to do this more often.

Plus, I used beef. I never, ever, ever make beef. Don’t believe me? Look in my archives. I count only once before. Progress. I like it.

It helped that I didn’t have to touch the raw meat. Thank you, Trader Joe’s.

Here are (most of) my ingredients: 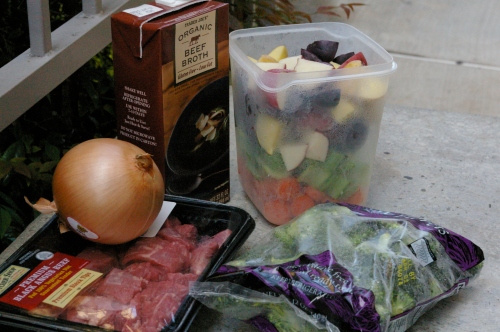 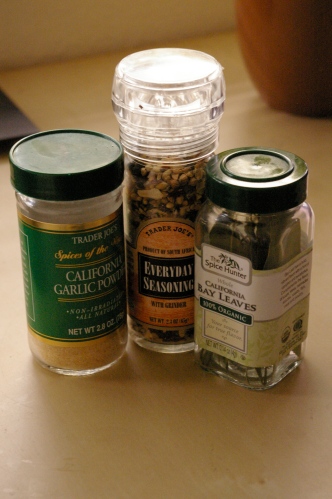 Chop up all ingredients.

Throw them all in a pot and, if you have room, stir. If you don’t have room (I didn’t), wait until it’s all cooked down a little bit. 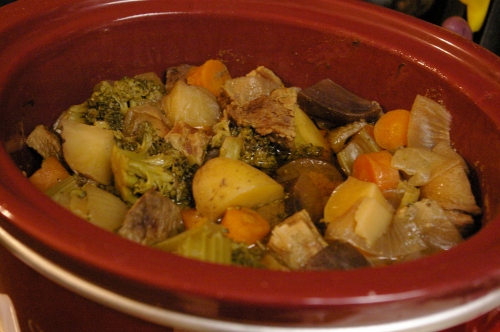 Top it with parmesan, if you want, and you’re good to go.

It heats very well as leftovers, too. I’d know. Trust me. I ate it allll last week.

Sick Day and a Knee Update

I’m home sick today. I’d show you a picture of all of the tissues, but… gross.

Instead, I’ll show you some food. And a few gratuitous shots of my swollen leg. Hot, right? Don’t worry, I’m going to make you wait for it.

So, this morning I broke some bread out of the freezer that I’ve definitely already started on but never managed to capture on camera. Whoops.

I was send this Nature’s Pride Hearty Wheat With Flax from Foodbuzz as a part of their Tastemaker’s Program. 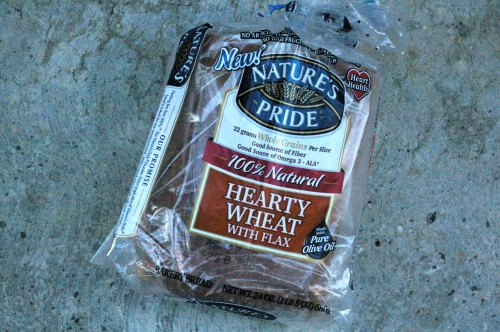 As a quick breakfast before my MRI this morning, I toasted a piece of this bread and topped it with Bee’s Knees peanut butter, half a banana (sliced), and a sprinkle of chocolate granola.

It was pretty great. 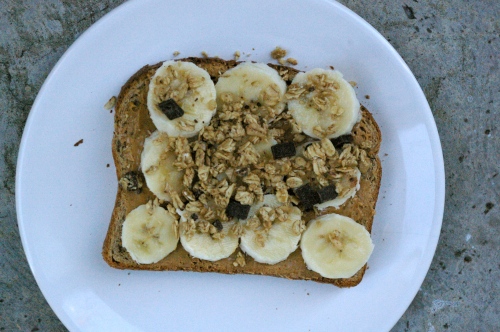 I will say, though, that this bread is probably better for buttered toast or, mostly, as sandwich bread. It leans more toward “savory” than “sweet.”

I bet it makes for a mean grilled cheese. Or an egg sandwich. Yum. I’ll have to try that. Or those. Probably both. You know, all in the name of research. I’m selfless like that.

Right. So… then, I went to my MRI. I may or may not have fallen asleep during it with my book on my face. No big deal. We don’t judge around here.

Anyway, the MRI showed that I don’t have a meniscus tear (yay!), but I do have warning signs of potential tears. I’m going to have to be careful about that.

What I definitely do have (no surprises here – I already knew this) is “Excessive Lateral Patellar Compression Syndrome” (I got the official name this time). Since PT hasn’t really been working for my left knee, and since the clicking, etc. has been so prominent, the doctor decided we should try a cortisone shot. After hearing about what it does and what any side effects or consequences were, I agreed.

Basically, the idea here is that we’re breaking the inflammation cycle and loosening everything up.

I was super nervous for the shot, but it wasn’t so bad. It was more of an uncomfortable pressure than actual pain.

I am, however, now sporting this bad boy: 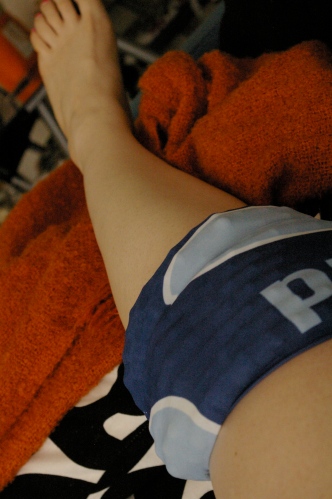 My knee is pretty stiff and sore, but the doctor told me that I’d likely feel a little pain for about 48 hours. He also said that in about 5-7 days, I should be seeing improvements. He even said that, if it works (though, no promises there), I may get to work out again — MY way, not the easy way.

Seriously, is that not the best news, ever?? That is, if it works. We’ll see. But, please, cross your fingers for me.There is nothing I want more than to return to boot camp… and possibly – possibly!!! – running. God, that would be amazing.

In the meantime, I’m also still nursing this cold. Which means I’ve been eating lots of soup/ stew and drinking lots of orange juice. See?

I actually made this stew the other day. It’s pretty good. I can’t wait to share the recipe. 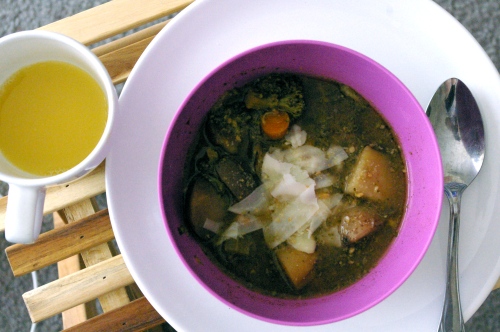 Plus, I was able to work on one of my New Year’s resolutions in making it!

Anyway, other than the doctor’s appointment and the icing, I’ve basically been spending my day watching Lie To Me, a new-to-me show.

Have any of you seen it? I like it so far.

Also, can anyone get me my dark chocolate-covered almonds? They’re all the way over there. 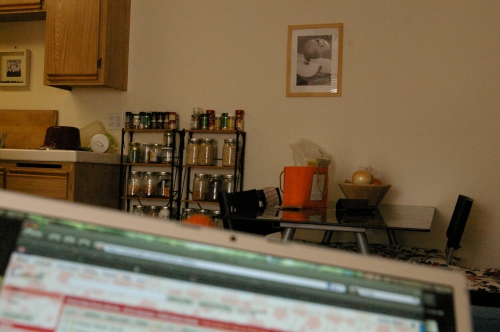 I fell asleep on Sunday night with a migraine that had hit me suddenly and hard. I hoped I’d wake up headache-free, with the migraine just a distant memory.

I hoped wrong. Monday morning began with me waking up to go to the gym, walking as far as the bathroom, and realizing I was in trouble. No gym for me. I went right back to bed.

I woke up again at 7:30 and pretty much went straight to Starbucks and CVS. I had some migraine supplies to get.

Breakfast: coffee #2 of the morning and cinnamon raisin toast with peanut butter. 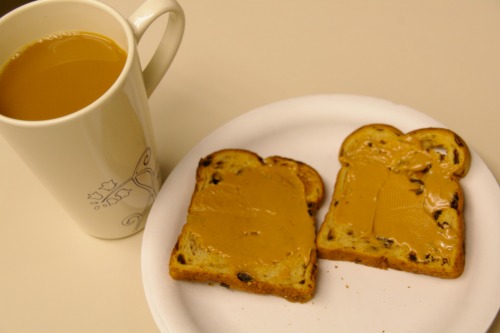 It definitely did not help that my office’s heat was broken yesterday. 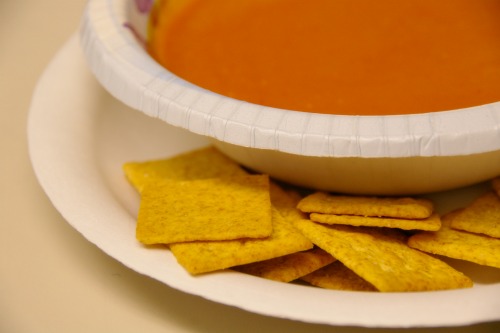 Dinner: homemade Tortellini, Kielbsasa and Spinach Soup (recipe from Runs With Spatulas)… minus the Kielbasa.

I kind of (read: totally) failed. Never use vegetable broth as a soup base unless you’re a vegetarian. Chicken broth is so superior.

Lesson learned: I should (almost) always listen to my mother.

Actually, that’s my roommate’s tea (and its not the Candy Cane one), but his mug was so much prettier than mine that I decided to use a picture of his instead.

And early to bed.

Non-existent. I was fast asleep.